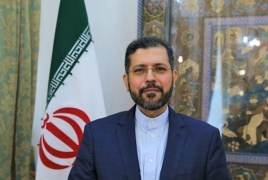 PanARMENIAN.Net – Iran will not allow the deployment of terrorists in areas adjacent to the northern borders of the Islamic Republic, said Saeed Khatibzadeh, a spokesman for the country’s Foreign Minister, on Wednesday, September 30.

“The Islamic Republic of Iran will by no means allow the terrorist organizations to transform the regions adjacent to our northern borders into a threat to our national security,” the Armenian unified infocenter cited the spokesman as saying.

“A transfer of clashes to the Caucasus will bring a much larger catastrophe than the Karabakh conflict,” he stated.

Azerbaijan launched a major offensive against Karabakh (Artsakh) in the morning of September 27, shelling Armenian positions and civilian settlements with large caliber weapons and rocket systems. Armenia and Karabakh have introduced martial law and total mobilization. The Armenian side has reported deaths and injuries both among the civilian population and the military. On September 29, the Azerbaijani army began shelling positions and civilian settlements in Armenia, which resulted in civilian casualty.

More than $10 million donated to “We, our borders; everyone for #Artsakh” fundraising of Hayastan …