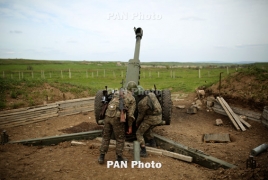 Also Thursday,Azerbaijan fired a missile from a strike drone on Mets Masrik community of Gegharkunik province, Armenia, which left resident Georg Vardanyan (b. 1937) killed and two other civilians injured.

Azerbaijan launched a major offensive against Karabakh (Artsakh) in the morning of September 27, shelling Armenian positions and civilian settlements with large caliber weapons and rocket systems. Armenia and Karabakh have introduced martial law and total mobilization. The Armenian side has reported deaths and injuries both among the civilian population and the military. On September 29, the Azerbaijani army began shelling positions and civilian settlements in Armenia, which resulted in civilian casualty. On October 1, a group of local and international journalists came under Azerbaijan’s shelling of civilian settlements. Some of them have sustained injuries, civilian casualty was reported.