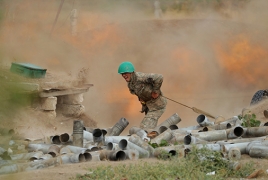 PanARMENIAN.Net – The situation along the Nagorno-Karabakh line of contact was relatively stable but tense overnight, the Armenian unified infocenter said on Sunday, October 4 morning.

“The situation was especially tense in the southern direction. The analysis of the enemy’s actions shows that they are going to attack,” the infocenter added.

Armenian Defense Ministry spokeswoman Shushan Stepanyan reported a firefight along the line of contact as of Sunday morning.

Stepanyan said artillery gunfire is taking place at lesser intensity in separate sections of the frontline.

Azerbaijan launched a large-scale offensive against Karabakh (Artsakh) in the morning of September 27, shelling Armenian positions and civilian settlements with large caliber weapons and rocket systems. Armenia and Karabakh have introduced martial law and total mobilization. The Armenian side has reported deaths and injuries both among the civilian population and the military. International and local journalists too have been injured in Azeri shelling of civilian settlements.

@@ArmNewsFlow
Նախորդ After intense battles, the #Artsakh #DefenceArmy has improved its position today, preparing the ground for further advancement. We will defeat and punish the criminals who threaten our existence. #ArmenianArmy #ArtsakhStrong
Հաջորդ RT @Pres_Artsakh: .#Azerbaijan’i terrorist army targets civilians in #Stepanakert, using Polonez & Smerch MLRS. From now on mil objects in…