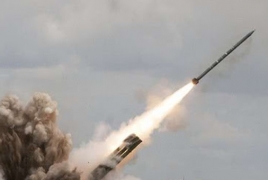 PanARMENIAN.Net – The governor of the Iranian province Khodafarin announced on Thursday, October 1 that a 6-year-old child was injured when a rocket fired during an artillery barrage from multiple rocket launchers hit a residential building in the village of Parvizkhanlu, the Armenian unified infocenter says.

The location of the village suggests that the rocket must have been fired from Azerbaijani positions, the infocenter added.

Parvizkhanlu is located to the south-west of the Nagorno-Karabakh line of contact, to the rear of Artsakh Defense Army positions, on the Artsakh-Iran border, 10 to 12 km from the position of the Azerbaijani armed forces and the Azerbaijani border. 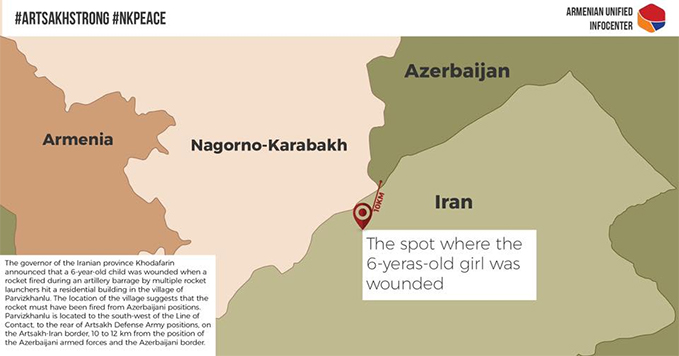 Azerbaijan launched a major offensive against Karabakh (Artsakh) in the morning of September 27, shelling Armenian positions and civilian settlements with large caliber weapons and rocket systems. Armenia and Karabakh have introduced martial law and total mobilization. The Armenian side has reported deaths and injuries both among the civilian population and the military. On September 29, the Azerbaijani army began shelling positions and civilian settlements in Armenia, which resulted in civilian casualty. On October 1, a group of local and international journalists came under Azerbaijan’s shelling of civilian settlements. Some of them have sustained injuries.

@@ArmNewsFlow
Նախորդ Entrance of the enemy to hell, our accurate blows and their inglorious exit ․․․ and this goes on We assure that the video is available and will be released at the proper time. https://t.co/VMmyKIzxni
Հաջորդ #ArtsakhDA: Yesterday with participation of DA SPU and detachment of “Voluntary Movement”, Artsakh DA units’ counterattack resulted in retake of hill Varangatagh (Lulasaz) and six enemy KIA. At this moment combat operations in the conflict zone of Artsakh and Azerbaijan go on.