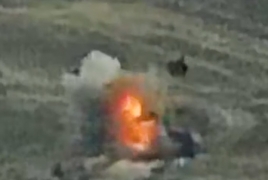 PanARMENIAN.Net – The Nagorno-Karabakh Defense Army has published footage from the frontline, showing the destruction of an Azerbaijani military motorcade.

The video was posted by the Armenian Unified Infocenter on Friday, October 9.

Azerbaijan, with help from Turkey, launched a large-scale offensive against Karabakh (Artsakh) in the morning of September 27, shelling Armenian positions and civilian settlements with large caliber weapons and rocket systems. Armenia and Karabakh have introduced martial law and total mobilization. The Armenian side has reported deaths and injuries both among the civilian population and the military. International and local journalists too have been injured in Azeri shelling of towns and villages, as well as the iconic Ghazanchetsots Cathedral in Shushi.

Donations can be made to Hayastan All-Armenian Fund, which has launched a fundraising campaign to support Karabakh amid Azerbaijan’s aggression.